Ours is one of the world’s most remote and isolated farming regions covering 1.3 million hectares and five iconic stations.

We’ve invested significantly in a breeding and genetics programme to unlock the potential of its distinctive terrain and climate. Our strategy is to breed cattle able to thrive in our climate while producing the very finest beef for our customers. 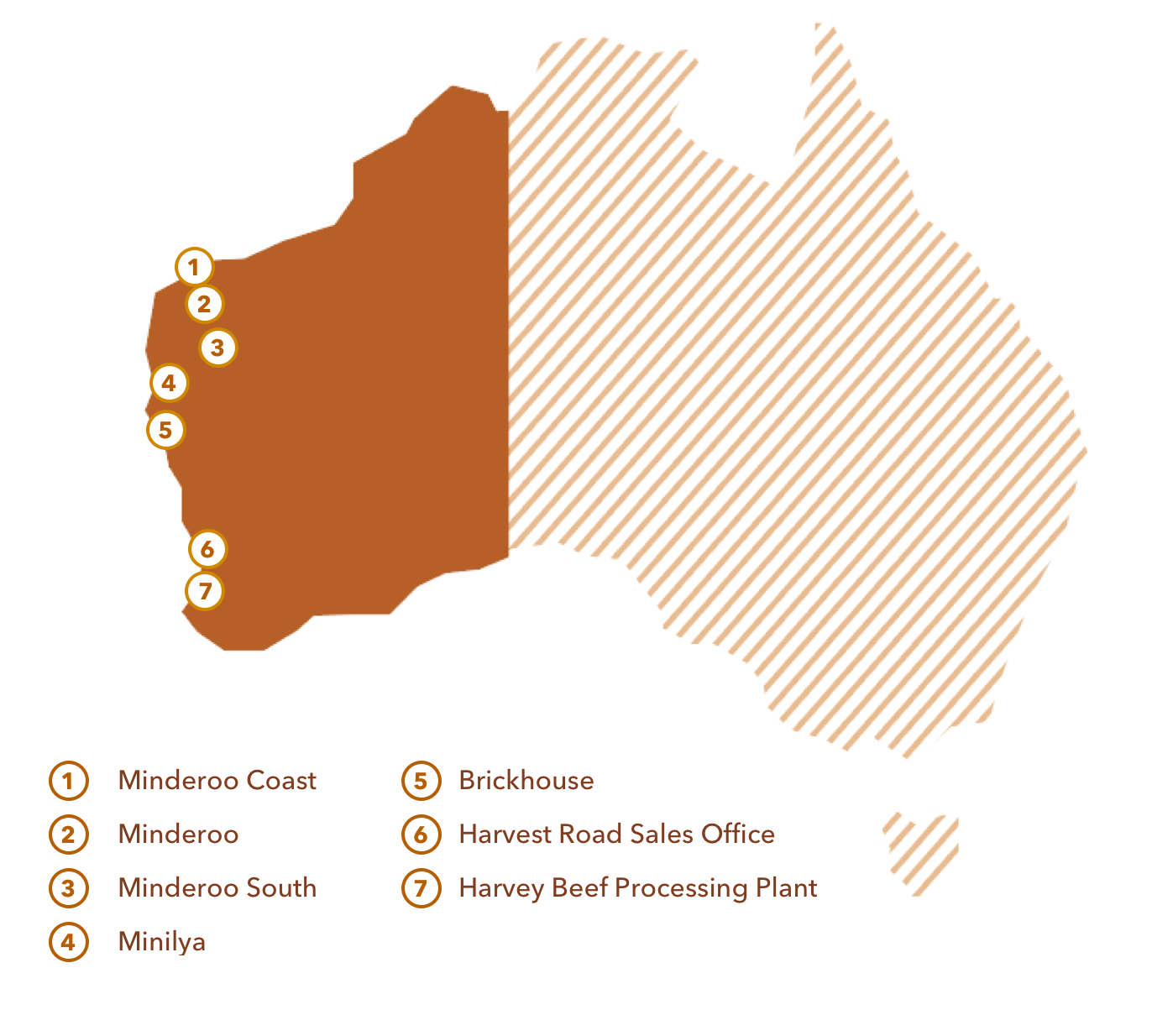 Stretching across 225,000 hectares of North Western Australia, Brick House Station is 20km from Carnarvon in the Gascoyne region. With 45km of Gascoyne river frontage and flood plains out to sandy flats and dunes along 60km of coastline, it’s rich with varied pastures, legumes and herbage. Owned by Forrest, Burt & Co. in the late 1800s, we bought it back in late 2015 investing in a major transformation, including new infrastructure, fencing and stock waters, to create a great backgrounding property for key seasons.

Minilya Station on the North-West Coastal Highway spans 273,000 hectares bordering the Minilya and Lyndon Rivers and Barrabiddy Creek. Their natural flood zones support a huge variety of pasture and saltbush species and we’ve established buffel grass in our sand hill country. Since buying the station in early 2016, we’ve been upgrading fencing and stock waters to increase efficiency and improve sustainability. Once complete, Minilya will be our specialist Wagyu breeding centre.

Established by the Forrest brothers and Septimus Burt in 1878, our founding station has weathered the highs and lows of the wool market, fires, floods and cyclones. After a short spell outside family ownership, Andrew and Nicola Forrest bought the station back in 2009 and focused on improving genetics, pastures and infrastructure. The Ashburton River runs its length with double frontage for 120km creating rich floodplains with catchment systems and mulga wash to sand plains and spinifex grasslands, a great source of protein for our cattle.

Minderoo South (Uaroo and Nanutarra Stations) borders the Ashburton and Henry Rivers with Rouse Creek running through. Alluvial plains with established buffel are complemented by rugged mesa outcrops and stony flats across its 490,000 hectares with spinifex and acacia throughout the ranges. We bought Minderoo South back in 2013 and our herd here is now a red breeder composite, including Droughtmaster, Senegal, Red Angus and replacement heifers. We work closely with our team at Minderoo Station, sending our growing cattle there for finishing.